Sensirion once again proves to be a pioneer in innovation for environmental sensor solutions. The SCD4x represents the first CO₂ sensor in miniature format, which impresses with a space requirement of only one cubic centimeter. This disruptive innovation is based on the principle of photoacoustic sensor technology and combines minimum size with maximum performance. This opens up numerous new possibilities for integration and application. Due to its unparalleled price-performance ratio, the SCD4x is particularly suitable for series production and cost-sensitive applications. Increasing environmental awareness not only affects the way people live, travel and eat, but also the design of buildings. Modern houses strive for very high energy efficiency in order to save natural resources, which are mainly used for heating. One consequence of this is the trend towards airtight buildings, which have better insulation than older buildings. Airtight buildings effect that there is less air exchange through walls, roofs, windows, cracks, etc., which has a negative impact on the air quality inside. Reduced indoor air quality, in turn, has a negative impact on people's productivity and well-being. This ultimately requires an active ventilation system that regularly provides fresh air for a healthy and productive indoor climate. Since ventilation systems require large amounts of energy for conditioning and providing fresh air, it is important to ensure high energy efficiency of the systems, which is made possible by ventilation strategies that control the air exchange based on current demand.

Humans are the main source of increased CO₂ concentration and other indoor contamination, so the need for fresh air depends on the number of people present in a room and their activities (e.g. cooking, sports, recreation). If people are in closed buildings, the CO₂ concentration in this room will increase and the indoor air quality will decrease, which is why the CO₂ concentration is recommended as an indicator for air quality and as a control parameter for ventilation systems: Based on the measurement of indoor air quality, a demand-oriented air exchange can be enabled, which on one side ensures a healthy and comfortable environment and on the other side guarantees a high energy efficiency.

Sensirion is now revolutionizing the CO₂ sensor market with the new SCD4x sensor, which is based on Sensirion's unique PASens® Technology. The PASens® Technology uses the photoacoustic measurement principle and offers extreme miniaturization of the CO₂ sensor without compromising the sensor performance. The reason for this is that the sensitivity of the sensor is independent of the size of the optical cavity, in contrast to the NDIR measurement principle commonly used today. This enables customers to achieve cost-efficient, flexible and compact integration and allows the use of CO₂ sensor technology in applications where previously there was not sufficient installation space available. In addition, the number of integrated electrical components has been drastically reduced, resulting in an extremely price-efficient cost structure and thus significantly lower prices. The miniaturization of the sensor and the attractive cost structure open up numerous new possibilities for the SCD4x to be integrated into new products and applications with high volumes, such as compact ventilation systems, air exchangers, air duct probes, air purifiers, thermostats, air conditioning units and air quality monitors.

Carbon dioxide is one of the central products of the human metabolism, with which with the food taken up coal hydrates, fats and proteins are converted under supply of oxygen among other things in CO₂, which is delivered again over the respiration. While this is quickly diluted outside, CO₂ concentrations can increase rapidly in closed rooms. In particularly strongly frequented areas, like e.g. seminar areas or classrooms, in addition, in particularly small interiors, like for example a car cab, the CO₂-Konzentration can quite increase tenfold within only a few minutes. While the atmospheric CO₂ concentration, relatively independent of location, is around 400 ppm (parts-per-million), up to 5000 ppm can be reached indoors with insufficient ventilation. The accumulation of CO₂ complicates the metabolism; already at a CO2 concentration of 1000 ppm sleepiness and concentration disorders can occur.

Due to the specific effect of CO₂ on the human metabolism a selective measurement of this molecule is justified. For CO₂ here the selective excitation of relative oscillations of the individual atoms, which can be achieved by absorption of infrared light, is suitable. Figure 1 shows the different absorption bands of typical gases occurring in the atmosphere.

Here it turns out that CO₂ with 4,26 μm has a very pronounced and with other gases to a large extent overlap-free absorption line, which is well suitable for a selective measurement. In contrast to NDIR-based gas sensors, such as the SCD30 from Sensirion, photoacoustic sensors do not detect the amount of transmitted light, but the amount of light absorbed in the gas. This is done indirectly, using the photoacoustic effect: This effect generally describes the increase in pressure after light absorption in a gas.

Molecules excited by IR-radiation transfer the vibration excitation to other molecules which leads to an increase of the translational energy, i.e. to a local temperature increase. In a closed volume, the increase of the translational energy leads to an increase in pressure, which can be detected by a pressure transducer. The general design of a non-resonant photoacoustic gas sensor is shown in figure 2. 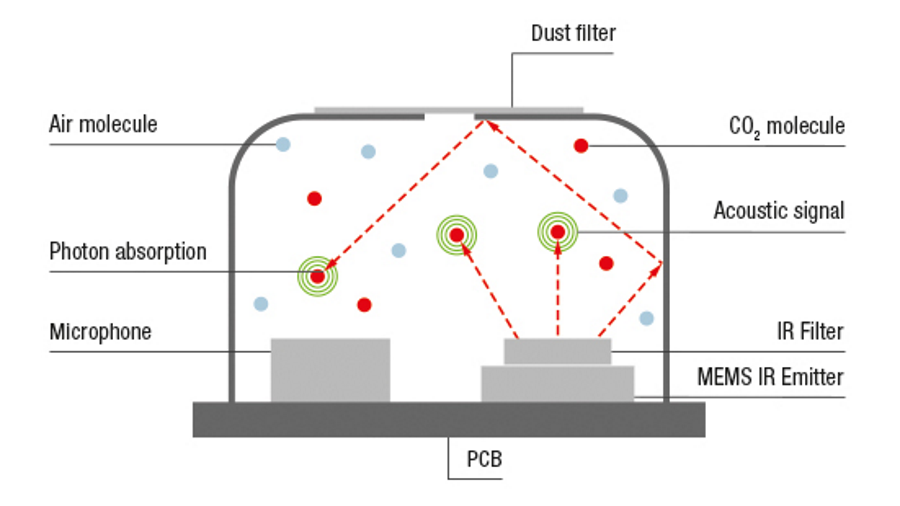 The key components of a photoacoustic sensor are a predominantly closed measuring volume, which is illuminated with narrow-band IR light, a microphone to detect pressure changes in the measuring volume and an opening of the measuring cell to the environment, which allows gas exchange with the surroundings. The narrow-band IR light is usually generated by a broadband emitter, which shines the emitted light through an optical band-pass filter.

With a photoacoustic sensor such as the SCD4x, a signal is generated that determines the CO₂ concentration as follows:

The IR light source is switched on and emits narrowband IR light into the measurement volume. This leads to vibrational excitations of the gas molecules to be measured, here CO₂.

After several 10 ms the light source is switched off, whereby the temperature and thus the pressure decreases due to thermalization of the measuring cell with the environment and the system returns to its initial state.

To increase the signal-noise ratio of the generated signal, the above measuring cycle is repeated several times. For this purpose the light source is modulated, the generated periodic pressure changes can then be considered as sound waves. In contrast to the SCD30, for which a light bulb was the first choice, a MEMS-based emitter developed by Sensirion was chosen for the SCD4x. This can be modulated quickly and has better long-term stability due to active control. For miniaturization and to protect the sensor from environmental influences, all components of the SCD4x are installed inside the measuring cell, see Figure 3. 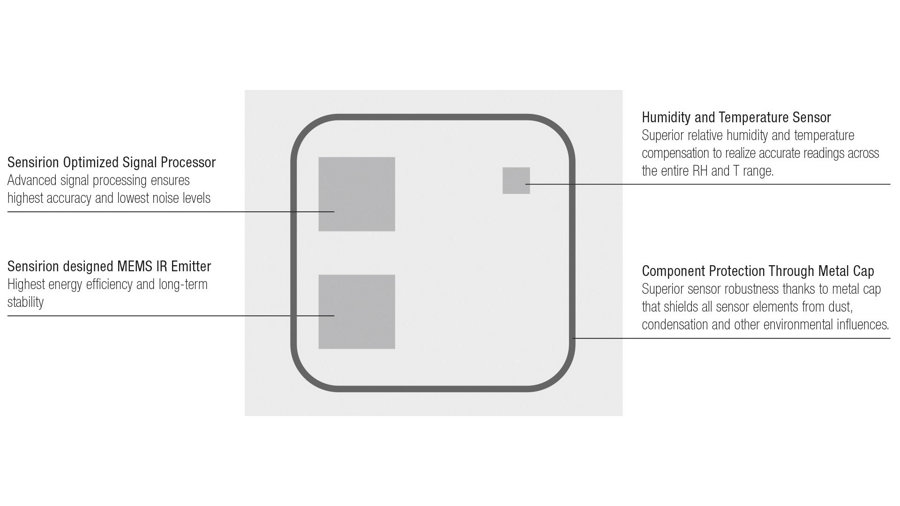 Once again, Sensirion is at the forefront of innovation in environmental sensing to create healthier and more productive environments. The success story in CO₂ sensor technology with SCD30 is continued by breaking the size barrier for these sensors with the SCD40 - SCD4x is the first miniaturized CO₂ sensor whose size and price allows integration into various devices within homes without compromising performance compared to traditional NDIR-based sensors. The graphic shows exemplary applications/devices that can be equipped with Sensirion's innovative CO₂ sensor solution.

This new technology for environmental measurements underscores Sensirion's expert status in the field of environmental sensor technology. The high degree of innovation of the soon to be available SCD4x CO2 sensor is also underlined by various nominations. The sensor has already received the "Best of Sensors" award at SensorsExpo 2019, was a finalist in the "Most Innovative Product" category at the AHR 2020 trade show and a finalist in the AMA Innovation Award 2020.

This article is reprinted from sensirion.com. The copyright is reserved to sensirion.